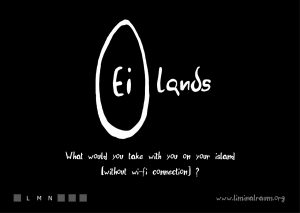 Imagined and directed by Nadja Grasselli

The island is an image with a long symbolic heritage.
It is a symbol of the human condition – and at the same time of the extreme.
It represents the individual and her /his realtion to society.
It is a symbol of an (almost) closed system – like the earth or an egg.
And if something breaks in?

Ei-lands is a performative process that opens to the public after intensive working sessions. With it LMN is experimenting on a new method, that questions the borders between performance and theater. The members of LMN, usually spread in Germany, France, the Netherlands, Poland meet each other in diffent places to work, step after step, on this experiment.

Impression of the first trial during the artistic residency Wonderous Stories of our partner Smallhouse Productions
Video: (Ei)lands from LMN – Liminale Räume on Vimeo.