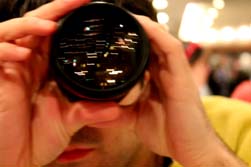 Andreas Hannes studied music and specialized in percussion at the university. His love for cinema made him leave the music scene for a while to create videos that later on turned to video dance that later on turned to physical theater classes that later on led him to take the decision to devote himself to dance. Currently he is mostly studying choreography at the SNDO while performing, collaborating, curating, producing and working maybe too hard to maintain the words seriousness and playfulness next to each other. Sometimes he thinks that having multiple parallel lives could be the best solution to his problems, perhaps.